Interdisciplinary approach of the protection of cultural and natural heritage

The area of the “old” hospital in Topoľčany is part of the monument zone, which was declared by the Regional Authority in Nitra in the form of generally binding decree no. 7/2000 of 24 March 2000, published in the Journal of the Government of the Slovak Republic, Part 4 of 17 April 2000 (ref. no.1) (currently part of the monument zone). The above-mentioned decree (the subject of which is the declaration of a part of Stummerova Street with the premises of the “old” hospital in Topoľčany as a monument zone), came into effect on 1 May 2000. The original hospital area itself, the so called Augustine Hospital is a national cultural monument.

Despite this formal protection, the area is in unsatisfactory condition. The poor condition of buildings, public space, and greenery, have aroused interest in this monumental complex. The interest in its salvation and revitalization has initiated in us to create an interdisciplinary team from various fields and universities and to involve this issue as a subject to our research work. It is a welcome opportunity to incorporate similar topics into the educational process and thus bring students closer to both the complexity and beauty of preserving the cultural and natural heritage.

This is how the KEGA project “Interdisciplinary approach to the protection of cultural and natural heritage – based on the example of the protection and rehabilitation of the national cultural monument, was built in the area of the “old” hospital in Topoľčany”. The project involved the faculties of the Slovak University of Technology in Bratislava – Faculty of Architecture STU (Institute of Urban and Regional Planning, Institute of History and Theory of Architecture and Monument Restoration, Institute of Fine Arts), Faculty of Civil Engineering (Department of Geodesy, Department of Building Structures), Comenius University in Bratislava – Faculty of Arts, Charles University (Department of Ethnology and Museology) and Trnava University in Trnava – Faculty of Arts, TU (Department of History and Theory of Art). Participating organizations, such as the Nitra self-governing region (owner of the building), the Regional Monuments Board in Nitra through the workplace in Topoľčany, Svet zdravia a.s. (tenant of the building), hospital management Svet zdravia in Topoľčany, State Archive in Nitra and Topoľčany and Municipal Office in Topoľčany. Such collaboration between schools and practice creates the preconditions that representatives from several disciplines together, on the basis of comparison and synthesis, propose new approaches and solutions to professional problems to be innovative, comprehensive and extend their professional application to students in the given fields of study. An equally important goal is to work together to create professional and personal partnerships in the academic environment.

The aim of the project was the preparation of materials, identification, evaluation of cultural-historical, technical and natural values and subsequent design of the way of protection and restoration – regeneration and cultivation of the “old hospital” complex as a whole and its links to the wider surroundings of the city and region. The research of the complex was focused on various areas: analysis of the building-technical condition of the buildings, dendrological research, geodetic survey with the latest techniques and technologies, monumental research with a focus on architectural-historical and artistic-historical research, urban contexts of the complex and its heritage values, historical and ethnological context.

The individual chapters of this publication describe the knowledge gained in these areas as well as formulate suggestions and recommendations for further use of the site in terms of historical and ethnological, architecture, urbanism, design, and park landscaping.

Thanks to all who actively participated in the project and created the conditions for its successful completion.

THE STORY OF THE OLD HOSPITAL IN TOPOLCANY

The subject of the project was the “old” hospital in Topolcany, declared as the National cultural monument1 which is a part of protected monument territory. Originally, it was a county hospital, one of the few building and historical monuments preserved, greatly connected with history of the town and the significant people who founded and financed the hospital, and worked in it for long years. It documents its legendary past when the system of the complex healthcare built particularly in the “old” hospital precinct, reached a high level. It was not a work of chance, it had a remarkable influence on development of healthcare service not only in the town but also in the entire region with an impact on various aspects of the life of society, including the social ones.

The milestone in healthcare development of the town of Topolcany, as well as of its vicinity, was the year 1885 when the start of a public hospital was initiated by Baron August Stummer (1827-1909). The public hospital was solemnly put into operation on 2nd January 1886 and, at the Baron’s invitation, on 4th February 1886, Vincentky Sisters of Charity of Saint Vincent De Paul) from Vienna, who started working in the hospital.

In 1939, the typhoid fever epidemics spread not only in Topolcany but throughout the area of Upper Nitra. Its liquidation was entrusted to a government representative, MUDr Eugen Gressner (1907-1998), the outstanding Slovak doctor of medicine who went down in the history of Slovak medicine as a head and co-founder of the Geriatrics and Gerontology branches. During 1940-1943, he expressed personal support for construction of a new healthcare pavilion, the Department of Epidemiology. 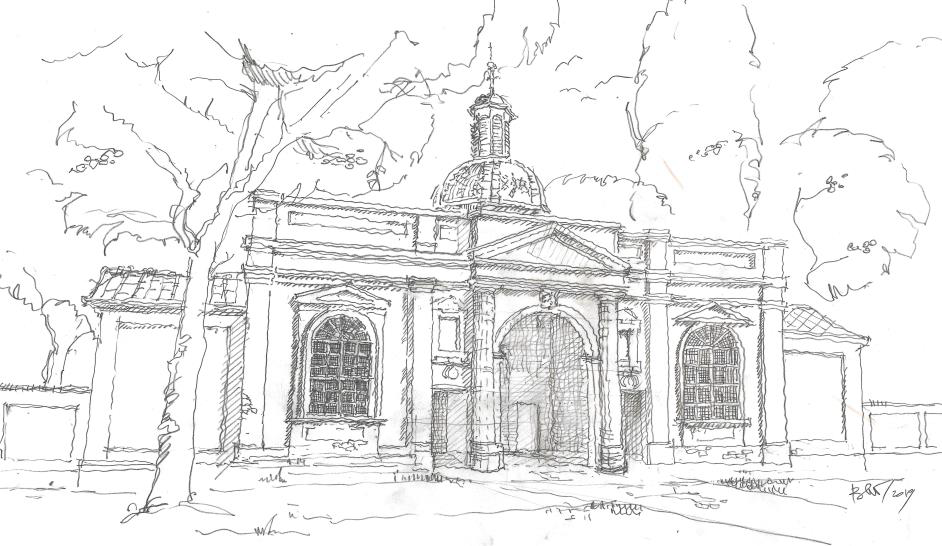 At present, the innovations in healthcare and the progress in medical science and technologies create new demands for architectonic design of hospitals. The old healthcare buildings and hospital premises undergo renovation and revitalization, or, if unable to meet the new requirements, they are transformed in such a way as to serve new urban functions. The above complexes have many a time high values of architectonic, landscape and cultural heritage.

The precinct of the “old” hospital in Topolcany represents in Slovakia a unique urbanist complex of historical healthcare facility with a great perspective potential. In addition to its proper values and owing to further high quality architecture of the pavilion (for epidemiology) built up in the spirit of functionalism (author architect Josef Nowotný from Bratislava), it also includes green spaces of the hospital park designed for relaxing and therapeutically purposes. The national cultural heritage consists of seven monument objects (hospital building, chapel, fencing wall, administrative building, outbuilding, pavilion for infectious diseases and the park). The buildings creating a square court of rectangular view with a fountain in the centre coming from the period of its foundation, had a circular communication connecting all the hospital buildings. Today, the “old” hospital precinct in Topolcany is an abandoned location with its destructed, damaged and neglected objects of unsuitable technical state and protruding greenery devaluing the constructions. The searched for destination of asocial elements is an example of abandonment, insensitive approach and disrespect.

Under the present state of neglected individual objects, it represents a risk of losing the cultural and natural values. This state has thus evoked a number of questions. Do we take care for our environment? Do we appreciate our cultural and natural heritage and realize its value, or, do we destruct everything and let it at the mercy of its destiny? Why do we need national cultural monuments?2 Regardless of the causes of the present cheerless state of the “old” hospital in Topolcany, they strongly entered the atmosphere of not only this site, but also the town. Today, it is no longer a hospital at the outskirts of the town, but a hospital in the centre of the town.

The basis of the project “Interdisciplinary approach to protection of cultural and natural heritage” (KEGA 016STU 4/2017), that was realized 2017 2019 with a grant of the Ministry of Education, Science, Research and Sports of the Slovak Republic are suggestions of solutions in which they participated together pedagogues, research workers and students of the Slovak University of Technology in Bratislava (Faculty of Architecture STU, Comenius University in Bratislava (Faculty of Arts UK) and Trnava University in Trnava (Faculty of Arts TUT). The project focused on complex preparation of basic materials to the effect of interdisciplinary approach, identification, evaluation of cultural-historical, environmental and technical values. Also, at proposals of the way of protection and restoration regeneration and cultivation of the premises of the “old” hospital in Topolcany considering the broader environs of the town as well as the region. Such a potential is provided by the precinct of the “old” hospital in Topolcany. It creates suitable position for interdisciplinary study of sustainability of environmental quality which involves the historical, cultural, artistic, technical and natural spheres.

The locality choice was also elected due to the project objectives to introduce interdisciplinary approach in higher education aimed at protection of cultural, natural and technical heritage. The project originality rests in a new approach to interdisciplinary working contacts of pedagogues as well as students which opened a mutual dialogue and search for common solution of the given problem. The project team created possibilities of cognition of penetrating the arts, technical sciences and sciences.

The aim of the project was to point out, at the instance of the “old” hospital in Topolcany, the high values of architectonic, landscape and cultural heritage and possibilities of new utilization respecting their preservation. The utilization of the precinct of the “old” hospital in Topolcany as a pilot instance clarifying to representatives of the community and experts of diverse fields that the listed monuments represent significant cultural and societal capacities which may be effectively involved in local and regional plans of economic, cultural and social development. It also focused on increasing of interest in urbanist and building history of the town of Topolcany as well as the attention to immediate cultural heritage of a vast cross-regional scope.

Every town has its specific profile of human, cultural, historical and natural characteristics. This profile provides understanding at seeking the ways of sustainability acceptable by inhabitants and compatible with their values, traditions, culture, institutions and ecological facts. To base upon existing characteristics and values helps motivate and mobilize human and physical sources of towns in order to reach sustainable development and regeneration.3 Misunderstandings of mutual ties of cultural and natural values bring about irreplaceable losses of identity and uniqueness of the site and country. It is symbolic that the idea of implementing the project arose in the year of the 130th anniversary of foundation of the hospital in Topolcany.4

At the time when the same aims intertwine to create and preserve values determined in favour of the present and future generations. It might be a star of the successful story of the “old” hospital in Topolcany which grouped a team of people identified with this vision.

All rights reserved. No part of the website of this project may be reproduced, stored in a searched system or distributed in any form or by any means, electronically, mechanically, by copying, recording or otherwise, without the prior written permission of the project partners: from Slovak University of Technology in Braislava, Comenius University in Bratislava and Trnava University in Trnava.